Aston Villa veteran central defender James Collins, who was on Aston Villa’s books from 2009-2012, posted a photo on Instagram with him in the claret and blue training jersey and the fans are talking about it. 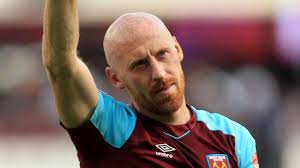 Manager Dean Smith addressed the Collin’s situation at the club just last week. He told The Birmingham Mail that Collins was still at the club and training with the rest of the Aston Villa players after being brought on trial under former manager Steve Bruce just two months ago.

Dean Smith has said he is keeping the former Wales international at the club, a player who is currently recovering from a small injury.

Smith said in an interview, “James is not fit at the moment so he’s going through his rehab to get himself fit again.”

“We will take it from there after that. He will have some rehab for seven days then he should be ready to go and train with the first team”.

Collins, who is 35 years old, played in 13 Premier League matches last season with West Ham United scoring just the one goal. He made a further two appearances in the League Cup. While it’s far from confirmed whether the defender will be offered a new contract or not, the situation is certainly heading in that direction.

With deep analysis, James Collins should offer an upgrade to Miles Jedinak and James Bree as a reserve, third choice centre back. His return to the team could see Jedinak move back into the midfield until a younger, permanent defender is signed in January.

At the moment, James Chester and Axel Tuanzebe are locked in as starting central defenders. With James Collins on board now, Miles Jedinak in reserves, and the January transfer window looming, the future of the Aston Villa defense looks brighter.